I have made a number of attempts at blog posts where I attempt to discuss (flawed) descriptions of the the meaning of this trip and how its suppose to change me, and what I hope to gain out of this trip, and my ponderances on my executive directors parting comment to me, "I hope you find what you are looking for". None of it was really working out, so I think I'll just go for a quick summary of how the past week has gone.

Currently, I am sitting outside our camper in an RV park in the far North British Columbia port town of Prince Rupert, under the warm sun enjoying the pathetic attempt at an IPA from a Nova Scotia Brewery (these Northwest Canadians don't seem to be big fans of hoppy beers). Today is the first fully sunny warm day in a week of mostly pouring rain and I'm loving it! This warm sun is that more appealing with the knowledge that it is about to change back to the rain that we've been living in as we head further North. So what follows is my attempt to sum up the past week...

Our trip started with a couple days at Whistler Village, my first ever summer visit to the ski town. It was nice and I think I would choose to come back again if I could have some assurance that the weather would be a little drier. During one night at the RV park we stayed at in Whistler I seriously had an anxiety attack in the middle of the night as the rain was dumping, believing that the river we were parked near might overflow its banks and I would be awoken by Siena's screams as she would be the first person to notice the water level had raised itself above her bed. This would not be the last time I had this particular middle of the night anxiety attack, as this was not our first RV park situated right next to a river. Despite the rain at Whistler we marched a couple miles by foot into Whistler village, where we purchased some expensive umbrellas and enjoyed as much as we could with the pouring rain. The girls even attempted a kids bungee jump in the pouring rain, screaming with glee and attracting other kids much to the dismay of the their parents and the bungee jump operator who had previously been enjoying her dry indoor hut with no customers. 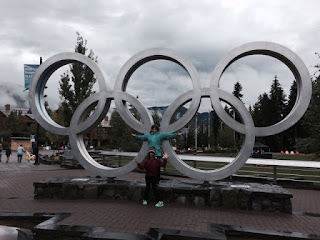 From Whistler we headed south to Horseshoe Bay and the ferry to Nanaimo, mine and Kathy's first experience on a BC ferry. Washington ferries will now forever seem very much lacking. In Canada, or British Columbia at least, they do ferries right! From Nanaimo we headed North, almost to Campbell River where we experienced our first stay at a Harvest Host location, Coastal Black winery, which makes berry wines and meads. The winery was a bit off the beaten path, and we never would have sought it out if it wasn't for Harvest Host, but was quite nice. We showed up to an empty winery about an hour prior to closing, but they were still willing to let us do a tasting. We ended up buying a bottle of Raspberry wine and a bottle of what I've been calling Blackberry Port (they call it Blackjack 21). Then we had their parking area to ourselves for a quiet night of boondocking at a winery. 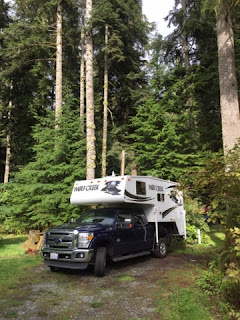 From the winery we headed to the North end of Vancouver Island to the quiet town of Port Hardy, for a few days before our 15 hour ferry to Prince Rupert. A stop at the visitor center in Port Hardy provided us with numerous options for outdoor activities, but the weather didn't seem to be agreeing with long hikes to the Pacific Coast so we opted to head an hour South for a day trip to the little tourist town of Telegraph Cove. The town reminded me of the setting of the 1980s Robin Williams movie, Popeye. With the rain starting and stopping the outdoor activity of kayaking, which the town is known for, didn't seem like a good idea with the clothes we had. So we explored the town and decided to check out the The Old Saltery Pub as we waited out a downpour of rain. The rain didn't seem to be letting up, so I opted to sacrifice my dry clothes and be the one to run to our truck and pick up our umbrellas. Almost immediately after grabbing the umbrellas the rain started to let up. As I made my way back to the pub with the umbrellas, I noticed a large group of people standing in town, who saw me coming and immediately shhh-ed me (I wasn't being loud or even making any sound). As I got closer I noticed large numbers cameras (iPad cameras) pointing at something out of my view. I was thinking, how quaint, the tourist see a deer and have to photograph it. As I finally got close enough to see what they were looking at I noticed it was not a deer but a juvenile black bear wandering through town as if it were just another local. I checked my pocket and was happy to realize my point and shoot camera was there. I quickly got my photos and continued back to the pub with a giant grin, realizing that one of Kathy's biggest goals was to see a bear on this trip. As I went in and told Kathy and the girls what I had seen, I was greeted with "you're lying", then a display of the photographic evidence I was given a "SHUT UP", then I was suddenly alone in the restaurant waiting for the bill. 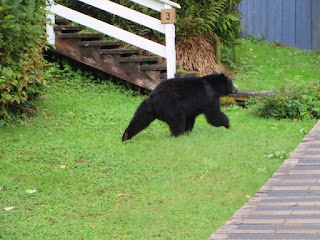 The next day with the weather forecast promising to not improve much, we opted to splurge a bit and take a whale watching tour. I mostly kept my apprehension about what to expect from a whale watching tour to myself. I kind of expected to not see any whales and spend a day in rough water in the rain. What we experienced and saw far surpassed my wildest expectations. Dozens of orcas sometimes coming within jumping distance from the boat, one fairly active humpback whale, countless bald eagles, several seals, and a rock covered with sea lions all seeming to argue over who is biggest and best. After the tour we had to eat and return home for an early bedtime. Our ferry to Prince Rupert, even with an early check in the day before, required us to be there by 6 am.

After what seemed like a long wait to board, the ferry ride started off with a view of a humpback whale in the bay just outside Port Hardy as we started its journey. The first hour or so was cloudy, but it started to clear as we headed into the Georgia straight, a 90 minute crossing which was the only part of the trip where we were exposed to the Pacific. The ferry rolled up and down back and forth as a few nice sized swells from storms far off in the Pacific made there way to the British Columbia. After that crossing it was nothing but endless views of the beautiful islands of the inland passage with almost no towns or civilization to be seen other than the other fishing and sailing vessels. At times the sun was so warm on the deck of the ferry that all you wanted to do was to have a beer and sleep on deck. Along the trip we were greeted by at least a dozen humpback whales and a few orcas all pointed out by the ferry crew. Then the sun went down, and the ferry kept going and going. Around 10:30 PM they told us we were 1/2 an hour from Prince Rupert and that we could head down to our cars. The RV park we were staying at for the night was 1/2 a mile from the ferry dock and was set up for folks coming off of a 11 PM ferry. By midnight we were set up. Which brings me to where I started this. 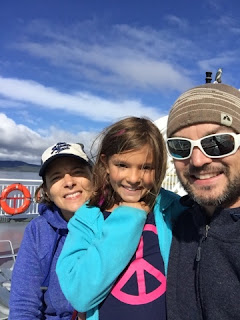 So I set out to write a couple paragraphs discussing the pros and cons of the trip, and here I am on paragraph eight with mostly just pros (except for the rain). I swear this was completely unintentional. I should in all fairness mention some of the cons other than rain: after months of planning and trying to figure out the minimal amount of stuff we could live with for 9 months it turns out we brought too much (surprise). After all the criticism I laid on Kathy I'm really questioning why I have six different sets of footwear just for myself (seriously?). Every time we stop and start our travels we need to spend a good 20 minutes moving gear from the camper to the truck or vise versa. There may be a care package of unnecessary gear that gets sent home soon. For equipment failures, it turns out one of covers for the front lights on the camper fell off without notice. With all the rain I believe we have pretty much soaked the interior walls of the front right side of the camper. Kathy's reading light has died and when I checked it out, water literally poured out of the ceiling. I'm hoping for no mold. The inside of the light was completely rusted out. Not good. While checking out the town of Prince Rupert today for some fresh fish to grill, I stuck the key in our camper lock and and whole lock mechanism fell out. I fixed it, but not good. Mosquitos are growing more obnoxious with every mile we travel north. In Prince Rupert, they're tiny little guys who can fit in between the mosquito netting. Itchy - not good. And worst of all, for the life of me I can't find a decent IPA anywhere in this part of the world. But if you put your fingers over the "CA" and the final "N" in a MOLSON CANADIAN, it turns into a MOLSON NADIA. I suppose when in Rome (or Canada)... 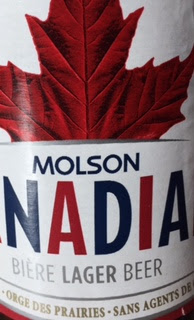 Here's where we've been

Here's where we skied

The Gorohoff Family (and authors of this blog)

Selfie from the Middle of Nowhere